Since I moved to Hornby Island, I have been involved in a couple of fundraising events by providing artwork to various organizations.   These include:

During the Herring Festival Event, I generally submit a couple of paintings to help out with frundraising.   50% of all proceeds from the art sale go to CHI.  (  Check out this great site at http://conservancyhornbyisland.org/).

HUGGS:  Total group fundraising efforts have brought in well over $20,000 each in 2011, 2013 & 2016.  These efforts provide HUGGS (Hornby United Grandmothers and Grand Sisters) with some of the money they raise  to help grandmothers in Africa that are caring for orphaned grandchildren whose parents have died from HIV/AIDS.  You can find more information about this fun-raising event at http://realhornby.com/creations/photo-essays/huggs-hornbys-united-grandmothers-grand-sisters-chair-revival-photo-essay/

HORNBY ISLAND FESTIVAL SOCIETY:  Another venture I have been taking part in for the last few years is the painting of bird houses for the silent auction during the Hornby Island Festival that runs for two weeks starting on the August long weekend every year.

"... the Hornby Festival has grown into an acclaimed 10-day event. Our programming includes classical, jazz, world beat and traditional genres of music, modern dance, childrens' programming, theatre and spoken word. Join us for Festival 2015 as we continue to bring leading and innovative world class artists to our stages.

This 10-day world-class event has been named one of the top five festivals in Canada (Aeroplan Magazine) and one of the top 5 cultural events in BC (Macleans). We enjoy stunning performances against the beautiful backdrop of the mountains, ocean and rolling hayfields at Olsen Farm and at Hornby Island's charming Community Hall."....(quote from    http://www.hornbyfestival.bc.ca) 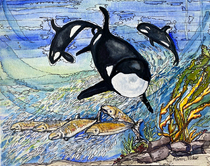 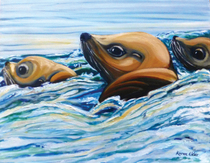 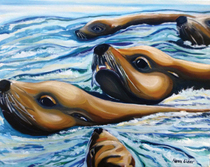 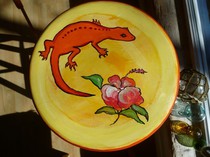 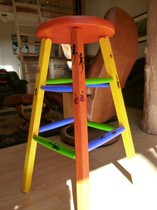 I painted this hand-crafted stool for the Hornby Island United Grandmothers and Grandsisters Society (HUGGS).  Proceeds from the auction in July 2016 go the Stephen Lewis Foundation to help the grandmothers in Africa raise their grandchildren whose parents have died due to HIV/AIDS.  The stool sits on a porch in my own neighbourhood!

(Scroll down to see photos of projects)

Painted for the Hornby Island Festival Auction in 2014.  Inspired by summer!

(I may have had the arrival of my 1st grandson on my mind when I painted this!)

This tray was painted for the Hornby Island Festival Society for their auction in 2015.  The hummingbird tray was inspired by a photo of a mother feeding her two babies in a cedar tree outside our bedroom window! 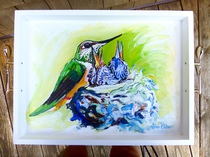 New Artcard added February 2022.  Click on the tab located above to check them all out.

Hours:  Open by appointment.   If I am in my Studio, I will have my "Open sign" out by the Studio or you can call for an appointment.  Check it out...

Art cards can be found in my studio, the Co-op, HIAC and on this website.

Check out fund-raising projects that I have participated in with both paintings and 3-D projects over the years at:  Volunteer Project Gallery

Art Cards for sale
More "About Me"
Facebook - Bent-Tree-Studio
Artist "Musings & Such" Blog
http://fineartamerica.com/artists/karen+elder
Check out HornbyIsland.com for more information about the island.